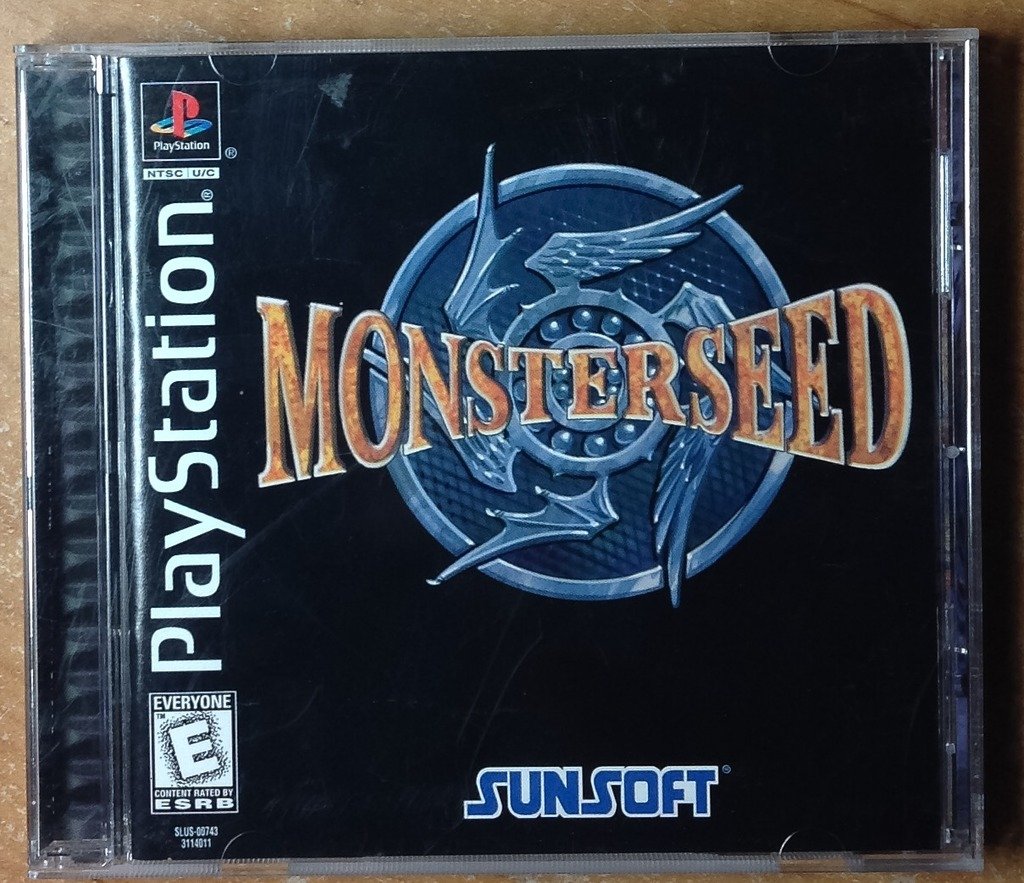 This is the game Monster Seed for the Playstation 1. This game may not come with the original case and instructions. We stand by our products and offer a 60 day guarantee. If a game does not work within 60 days from the time you receive it we will gladly exchange it for you.

This game is a monster-collection RPG. The player has to gather eggs incubate them and then send their collection of different monsters into battle. You have a choice of 97 monsters each with a set of 5 characteristics.

Monsterseed is the latest addition to the growing legion of monster-breeding games, which have become so popular as of late. In what appears to be a fine amalgam of the 16-bit and 32-bit eras, Monsterseed can best be described as a 16-bit game in quaint 32-bit trappings. Reminiscent of Riverhill Soft/Atlus' Tactics Ogre series, Monsterseed is a monster-breeding/strategy RPG of a specifically simple nature.

"p"Perhaps aimed at a slightly younger crowd, Monsterseed isn't nearly as menu-heavy as Tactics Ogre or games of a similar bend, but it's simple in a streamlined, easy-to-learn format. In the game, you must find a wide variety of monster eggs, incubate them at various temperatures, and combine them with an assortment of solutions. The nature of your combination will then dictate the nature of your monster.

Assuming the role of Daniel, a young "ruler" (which is another term for monster breeder), you travel to a town called Len Bal looking for work. Unfortunately, the town has been infiltrated by a band of unscrupulous thieves named the Black Rope Gang. As a ruler, it is up to you to breed an army of monsters to defeat the scourge of Len Bal.

Upon starting the game, your first assignment is to enter the Monster Fighting Ring, which is the local arena in which you will hone your skills. After defeating the beginner level, you will win various eggs and solutions, which you can hatch at the local hatchery. As you complete increasingly difficult levels at the ring, you will obtain even more exotic eggs and solutions, which will enhance your chances of victory in battle with the Black Rope Gang.

Graphically, the game features polygonal characters and graphics (particularly during battle sequences), but it has prerendered backgrounds and decidedly 16-bit graphics when it comes to dialogue boxes and menus. This game really feels old school. However, that's not to say the graphics are bad. The Dual Shock works fine with the game, making moving around easy. Nice spellcasting effects round out the package. While the sound effects are nothing special, they don't detract from this innocuous little game either. The weirdest thing about this game is that whoever translated it must not speak English as his native language, as the dialogue is often awkward and peculiar.

Ultimately, this game is certainly not groundbreaking, or even flashy, and for some, it's way too simple an RPG, lacking the depth of some of the newer monster-breeding games. But it still has a certain intangible charm that gives this game a recommendation. It has a straightforward storyline and a streamlined front end that will keep gamers interested and entertained. While Monsterseed makes no pretense of being the next big thing, it just goes to show that there's nothing wrong with being second best. --James Mielke
--Copyright ©1999 GameSpot Inc. All rights reserved. Reproduction in whole or in part in any form or medium without express written permission of GameSpot is prohibited. GameSpot and the GameSpot logo are trademarks of GameSpot Inc. -- GameSpot Review

Read more
I really appreciate you guys for your swift response. Thanks so much, you guys made my search so much easy.

Read more
I am really very happy with the service and the extraordinary support given to me from all your representatives.

Read more
Portals like IndiaMART which we are using are being used by much more people like us. This has helped us reach out to many new segments and customers.

Sell on IndiaMART for free

Reach out to more than 4 crore buyers.
Sell with us.

Get instant notifications on the go. Download our App Now

Have a requirement?
Get Best Price